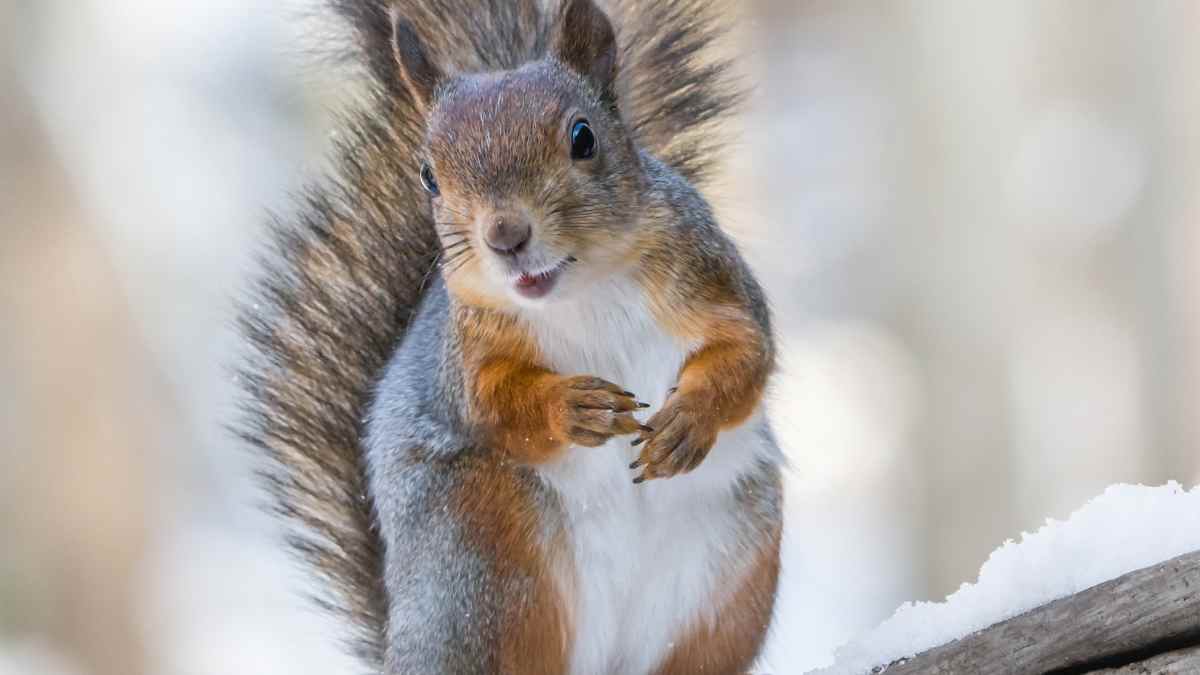 For example, baby squirrels can cry while adult squirrels rattle, bark, buzz, and make other sounds.

Although squirrels are regarded as diurnal (that is, they are usually active during the day and night), most squirrels can be found resting at night time. Therefore, most sounds from squirrels at night are from the flying squirrels – which are nocturnal animals.

You must have heard squirrels’ sounds/noises around your house at night, and you want a way to stop it. This article explains the different sounds/noises squirrels make, why they make them, and what you can do to stop squirrel noise.

14 sounds squirrels make and why they make them.

The means of communication among squirrels is advanced. They make different sounds in different situations. Their sounds change as the context changes. For instance, we have mating calls, distress calls, alarm calls, and sounds for defense mechanisms.

There are times when the sounds are alike, though. Below you have detailed explanations of the different sounds/noises squirrels make and why they make them.

There are different situations that prompt barking in squirrels. Sometimes, squirrels bark close to other squirrels’ nests to warn them of predators. Also, you can hear this noise if your house is close to its natural habitat.

This barking sounds like a blend of a small dog’s bark and a cat’s hiss. Occasionally, squirrels bark to scare other squirrels off of their food. Finally, squirrels may bark when there is an invasion of their territories.

The sound is likened to the screeching of cats. There is also a phenomenon called “Quaa moan.” Squirrels make this sound to indicate that they have lost sight of predators.

Whenever you hear rattling noises from squirrels, know that a territorial “clash” is about to begin. This rattling usually occurs when many squirrels are nesting in the same area.

When squirrels notice predators in their territories, they make loud buzzes. Squirrels make these sounds through their nostrils. The buzzes serve as an alarm call to other squirrels in the territory.

The alarm call alerts the other squirrels, and the predators may have to walk away as they can no longer pull off surprise attacks on the squirrels.

When competing for territories, squirrels sometimes screech instead of rattling. When other squirrels cross into their territories, they threaten the intruders by screeching. A primary reason why squirrels chase one another is territorial competition or defense.

You can also hear squirrels screeching if they spot a predator close by (alarm calls). Screeching noise can also be a mating call – expressing interest to potential partners.

Squirrels purr when they are happy, content, and excited. They may purr when irritated as well, though. Also, when there is danger, squirrels alert themselves by making purr-like sounds.

Immediately squirrels begin to chirp; there is danger around. This sound is made to warn other squirrels of imminent danger. Loud chirping noises from squirrels can also be a mechanism of defense against predators. Young squirrels also make this sound when calling for their mothers.

A kuk sounds like short barks. The quaa sound then follows the barks. The kuk-kuk-kuk sound is also a warning or alarm sound to signify the presence of predators.

Crying sounds, usually made by baby squirrels, are distress calls.

When young squirrels have been attacked, injured, scared, or they can not seem to locate their nests. They cry (shrieking sounds) out whenever they are disturbed.

However, when adult squirrels cry, it is an alarm call to alert others of dangers.

The meow sound signals to other squirrels that the predator is gone but may not have left altogether. It is softer than the alarm call, thus making it difficult for the predators to locate where the sound is coming from.

When squirrels move from one place to another, their nails make scratching noises, especially when they run across glass or wooden platforms. This scratching probably explains the noises that you hear at night.

How do you deal with squirrel sounds?

Squirrels can either make these sounds alone or in combination. There is also a possibility that the sounds you hear at night are perhaps coming from your attic. So how do you stop these noises from disturbing you?

The following are steps to take when handling squirrel sounds at night;

A proper assessment may involve determining that the noise comes from squirrels. Knowing where the noise is coming from will go a long way in eliminating the causes of the noise.

Also, locate the entry points – how they got in (especially if the noise is in your house).

For example, is it from your attic or walls? Or is it coming from the yard? Knowing this will help in making sure that they never return.

Remove and keep all food sources.

The fact that squirrels are around you means that there is a food source for them around you. It may be nuts or bird seeds. You should remove anything that can attract squirrels and keep them away.

Now that you have identified where the squirrels are and how they got in, you must eliminate potential hideouts. So that when you chase them from their present location, they do not hide in another place only to return and make noises again.

Any area that is small and dark should be blocked or closed. Make sure the squirrels can not hide anywhere around.

Now that the squirrels are probably cornered, they have no choice but to follow the only escape route you want them to pass. Now, you proceed to chase them out of hiding. You can achieve this by various means. You can use vinegar scents, fox urine, loud music, or any other means to get the nutcracker out of its hiding place.

There are two options from here. First, you can choose to set a trap for the squirrels at the escape route (using some tasty squirrel bait). Then, after trapping them, you can now release them far away from your home.

Your second option is to let them leave through the escape route and then use substances that deter squirrels and prevent them from coming around next time.

Either way, you will not hear sounds from squirrels in a long while.

So there you have it, 14 sounds you might hear from squirrels at night or even during the day.

If you are concerned about squirrels at night, you should take steps to seal your home up.

Squirrels only need a small entry point to get in, so you must be meticulous when looking around your property. Look high and low; that is my advice!

Good luck! And if you need some extra help, you should reach out to a qualified pest control expert who will be able to give you the support you need to get rid of squirrels.